Roseanne Montillo’s, The Lady & Her Monsters, Takes us Behind the Scenes & Plops us Down Right into Mary Shelley’s Life 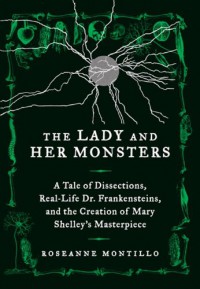 Oh, what a sad life Mary Shelley led!
The book follows Mary’s life right from the moment of her birth and touches on every source of inspiration that led to the writing of Frankenstein.
The story would leave Mary for a while at some points and follow other people who were vital to the writing of the book. These deviations made for refreshing changes.

Mary came from the union of two geniuses. She gulped down revolutionary ideas, novel theories, and latest scientific developments with her mother’s milk. She grew up sneaking into the soirees thrown by her father every week. Scientists, artists, and all kinds of important people attended those events.

Those ideas took hold in her and came out in the form of Frankenstein’s story.

The pall that we find hanging in the going-ons within the novel is not much different from what Mary had to live with, all her life. She had inherited depression from her mother while her father did his best to make things worse every time she reached out to him for emotional support. Losing three children did not help much and marrying someone who was also going through a lot of guilt for driving their wife to suicide kind of sealed her fate.
The people and her so-called friends and relatives weren’t too kind to her either and her husband’s death did the rest of the damage. She died at the age of 53 and the only source of happiness in her life was her happily married son and his wife.
Interwoven with Mary’s tale is the tale of grave robbers and resurrectionists who can be found operating in many parts of the world even today! Their profession — stealing bodies — helped medical science but horrified me. Here’s an example, where the body they stole ended up in the hands of Aldini who believed he could shock the cadaver back to life:

“On the first application of the arcs the jaw began to quiver, the adjoining muscles were horribly contorted, and the left eye actually opened.” For those who had not witnessed such things before, Foster actually appeared to have returned to life and was now staring up at them.

The Anatomy Act was introduced as a result of these macabre forays and just made me realize how new laws have to be forged with the arrival of novel situations. Nobody thought they’d need laws for the internet before it became mainstream and yet here we are. It reminds me of something else from the book: even during Mary’s life, others could use her work and adapt it for the theaters etc. There were no copyright laws back then to keep people from doing that!
It is said that while the son inherited his father’s good looks, he didn’t inherit any talent. Personally, I think he was the luckiest of them all.

Some words that stayed with me

All three, it was suspected, formed a crush on Shelley, but only Mary had the mental capabilities and legacy he was attracted to.

Those who came to learn of Shelley’s subsequent romantic adventures knew very well why his wife had been disposed of and that particular mistress gained. Even Harriet knew why she had been set aside. When asked this by Thomas Love Peacock, she replied, “Nothing, but that her name was Mary, and not only Mary, but Mary Wollstonecraft.” Mary Wollstonecraft Godwin, at that.

He continued to investigate the drug’s properties and was so astounded with the results, he derived the name laudanum from the Latin word laudare, “to praise.”

One such town was Nieder-Beerbach, on whose summit, barely visible from the water’s edge, stood the famed, or infamous, Burg Frankenstein.
“What’s in a name?” Mary Shelley wrote years later in a book titled Rambles in Germany and Italy.

the castle was the site of much bloodshed when a member of the family was locked in mortal combat with an enemy of unusual fortitude and cunning, with a deep understanding of psychological warfare. The enemy, intent on overtaking Burg Frankenstein, had successfully overthrown other families in the past. Known for his brutality, Vlad the Impaler and his doings provided, in part, inspiration for another gothic masterpiece: Bram Stoker’s Dracula.

most notorious inhabitant, Johann Konrad Dippel, a man who, strangely enough, bore a striking similarity to Victor Frankenstein, and to an extent, to Percy Shelley as well.

Words that I learned