Riveted by Meljean Brook is Riveting for the Most Part 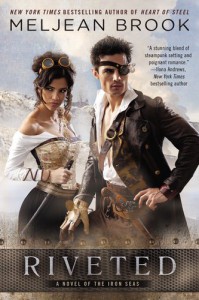 Annika hails from an island only inhabited by women. Due to their homosexuality, they hide themselves away from the world and encourage myths to keep people away. When she comes across a scientist who is going to study that island, she must keep him away. Failing to do so and falling in love with him, Annika must minimize the damage and exposure his presence threatens. She left her home to look for her sister, Kalla, who was ousted by the elders when she took the blame for something Annika had done.

I like the relationship between the protagonists because none of them took the other for granted. They proved themselves to each other and worked together as a team when trouble came calling. Could have done without the gazillion sex scenes, but that’s just me.

What I didn’t like was the final reveal about Kalla’s whereabouts after all those years. Annika spent the world looking for her and she had been next door all this time? She claims she was protecting a megalomaniac from exposing their people. Okay, but she couldn’t have sent a missive or something to let her family know that she was still alive and well? How believable is that anyway?