Plato and a Platypus Walk into a Bar... and Teach You Philosophy Through Jokes 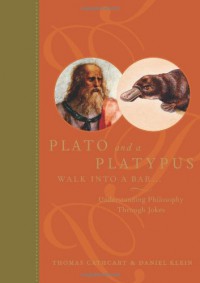 This book was a lot of fun. Here are some of my favorite parts:

When asked whether he believed in free will, twentieth-century novelist Isaac Bashevis Singer replied, tongue-in-cheek, "I have no choice."

On the Golden Rule that is a part of most religions

Similar considerations led English playwright George Bernard Shaw to wryly rewrite the golden rule: "Do not do unto others as you would have others do unto  you; they may have different taste."

Although I'm happy in my current job, having recently received a promotion (I'm the new Thane of Cawdor), that's not enough for my wife who is eager for me to get ahead. I'm not saying I lack ambition, but I am reluctant to do what it takes to climb higher -- the long hours, the bloody murders. And yet, don't I have a special obligation to consider my wife's desires? We are, after all, a family.

On Philosophy of Law

A lawyer sends a note to a client: "Dear Frank: I thought I saw you downtown yesterday. I crossed the street to say hello, but it wasn't you. One-tenth of an hour: $50."

On Relativity of World Views

The twentieth-century American philosopher W.V.O. Quine wrote that our worldview is relative to our native language, a framework we are unable to climb out for a different perspective.